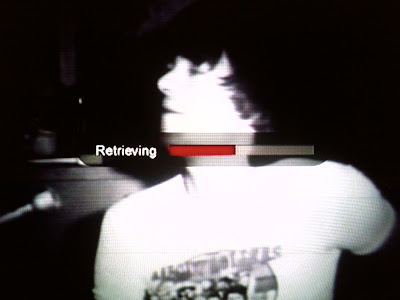 Hey, is Dee Dee home?  Well sorta, he's just very talkative. Basically, if you're not a hardcore (or at least used to be) Ramones fan, you probably won't be persuaded to learn more. Well, it all depends I suppose. A better way to put it is this movie is the rare outtakes/rehearsals CD as opposed to "the best of" compilation. For Ramones nerds/fans only really. This documentary is a bare bones interview, with some nice old photos and various footage from other sources intercut.  You'll hear about the origins of "Chinese Rocks", Dee Dee's general insights and opinions of other musicians in the scene at the time. I had to the laugh at one part when he makes a request for some amino acids from the health food store from a gofer. Poor Dee Dee passed away almost 10 years ago.

During my own obsessive Ramones phase (when I was 14), Dee Dee was always my favorite. I just thought he was real cute and there was a guy at a my middle school who looked a lot like him that I had a big crush on (nothing happened with that). I think my hearing the Ramones was later than most people since they're so insanely popular and usually most people's launching pad when getting into punk rock, power pop and girl group music. I remember once being sick, getting picked up by my brother from school and feeling better once the Ramones were blasting on the car stereo. Another time, I bought the second volume of "All The Stuff And More" cassette, only to be greeted by some neo-country pop when we popped the tape in the player. I guess the manufacterer messed up. Thanks Sire.

Check out Dee Dee's pretty long discography and also his biography, "Lobotomy" which I'm probably going to reread. There's also the first book I read about the Ramones called "Ramones: An American Band". In that book, I learned that Cheap Trick was one of the earlier choices to be in "Rock'n'Roll High School" before the Ramones. That would have made for an interesting movie. They should have made both! Finally there's Legs McNeil's, "Please Kill Me" which is essential for anyone interested in New York music from the 1960s to the present. Its a page turner for sure. There's also a bunch more Ramones related books that I haven't read:
* On The Road With The Ramones
* Poisoned Heart: I Married Dee Dee Ramone
* I Slept With Joey Ramone