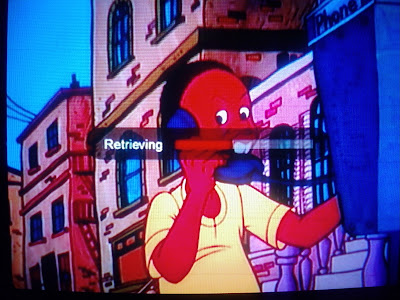 Posted by Machine Gun Kristin at 11:24 AM 2 comments 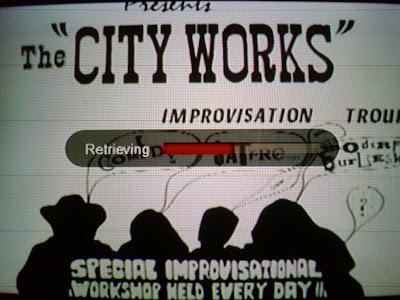 Sorry, no real, stick-to-the-single-topic-entry this time around. To keep up with the latest news, I felt it would make sense to write a little about the timely issue of Netflix's decision to raise their rates and divide their subscription choices. I have my email that I received just a couple of days ago posted below, explaining the new rates.

My first thought is, not being a cable subscriber, that Netflix is still much cheaper than any cable TV service. We use a regular antenna (need a new one!) for some broadcast channels and watch cable TV shows not featured on Netflix online on their respective full episode websites. We use our Nintendo Wii for streaming, so we can't watch online content through that.

Secondly, is it possible that they will use the extra money to fund more licensing agreements to host more programming? To me, this would make the most sense. They have already been trying to cut deals with various companies to expand their growing streaming library. I do recall reading an article though about how they are not in any way going to view themselves as a competitor to cable TV. Which I'm not sure how much truth there is to that considering with certain shows they stream, they were first broadcast just weeks earlier. Think about it this way: with instant streaming, you are watching an unlimited amount of content. I can't even being to fathom the figures on that; how on earth do you calculate the royalties? Are the studios, companies, actors, directors, etc being short changed? Is that why certain shows are still not available for instant viewing? Are certain shows/movies too scared of losing money?

Just today, an article raised questions about Netflix's price change decision and their hardcore customer loyalty. Do you remember that Netflix has single handedly destroyed the video store model? My brother and I used to hang out at the local 16,000 Movies, looking at all the gimmicky boxes in the horror section (remember the microwave one where you push the button?), pervey guys going through the curtain to the porn section in the back, hearing employees shout out the returned new releases being piled back onto the shelves, eat Choco Tacos, play Mortal Kombat and finally get out of the house for a little while. I'm not sure if one exists, but I would love to see a documentary about the death of the video store. Growing up going to them was undeniably important to me in learning about movies, much like going to record stores (also its existence being threatened) teaches you about music. 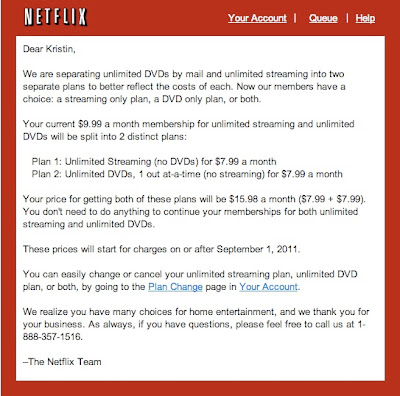 They say that a barrage of angry
requests, emails, blogging, etc. may help alleviate the situation because Netflix is very much devoted to their customers. The only contrary example I can think of though (off the top of my head) is the deletion of the "Friends" function on the site. Even with many upset customers, that features still lies on the cutting room floor.

Finally, I don't know what my own decision is on the matter. Obviously, that may effect the future of this blog. The rate change over isn't until September, so be the on the lookout for more content/entries from me. Also, be sure to "Follow" me to stay up to date. Thanks!
Posted by Machine Gun Kristin at 6:22 PM 0 comments 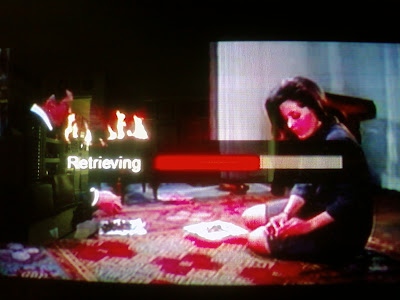 I had a sleepover party last week to celebrate mine and my friend's birthday which are just a week apart. We drank a bunch, gossiped and listened to records. We had a great time. The next morning, in a semi--hungover daze, my friend suggested we watch "Valley Of The Dolls", which I'd actually never seen before.
This movie is total eye candy. The great looking sets, kool clothing and an amazing opening credit sequence with its pill-form theme. We have 3 fantastic looking women: Barbara Perkins, Patty Duke and the late Sharon Tate. This movie reminded me of "Mommie Dearest" for some reason. Maybe the same tone and fame-hungry psychotic tendencies.
The jazzy numbers sung by Patty Duke (apparently overdubbed) and Tony (in a crazy looking burgundy suit) are real good, and kinda hilarious at the same time. Just watch Patty's insane moves on a telethon show early in the film. One of my friends said, "Cover her head and its Robert Plant". hahaha.
All three gals progressively become more into drugs (mostly "doll"/pill-popping and booze) and have dwindling careers as well as relationship woes. Patty's free use of the word "fag" while requesting "skim milk" without any manners and then instead of rehab, is thrown into a sanitarium. Hey, after all, I believe shock therapy was still considered somewhat normal at that time. Poor Sharon Tate admits she's only as good as her body when it comes to her career and after learning that she has to have a mastectomy, she kills herself. I had to hold back some tears as she goes to sleep and her husband (now in the sanitarium with Patty with a genetic memory loss disease) croons something like "come away with me". For what I remember, Barbara seems to get off the easiest and even gets to return home at the end with her head held up high.
Previously, my only knowledge of this movie was when Barbara (coincidence!) Barrie reads the novel before bed in "Breaking Away" (one of my favorite movies). Also, Russ Meyer's bizarre, exaggerated version called "Beyond The Valley Of The Dolls", which was penned by Roger Ebert (!). Its a must see and so is "VOTD".
Posted by Machine Gun Kristin at 8:02 PM 0 comments 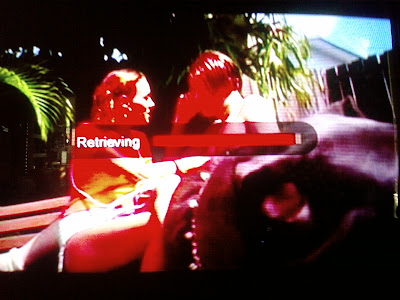 "Bully" is a true story that happened somewhat nearby where I grew up in South Florida. I think my sister knew of some of the real kids, probably far down the line through a friend of a friend etc. They definitely capture South Florida in all its seafoam green and coral color scheme, swamp-like sweaty conditions, and the mind numbing boredom of having nowhere to really hang out except the mall. At least, that's how I remember it growing up.
Since this is directed by Larry Clark, there's an extreme amount of gratuitous behavior; nudity, sex, violence, and oh, the f-bomb about 300 hundred time apparently. The book this movie is based on is just as shocking and a great, page-turner of a read. I kinda laughed at the casting of Rachel Miner (who was married to Macaulay Culkin for 5 minutes) since the real "Lisa" is overweight, and they still refer to her as "fat" in the film even though she's probably 110 pounds. Hell, you can see her ribs poking out during the many sex scenes she's in.
For me, it was weird to see Leo Fitzpatrick in this as the phony "hitman". When he starred in "Kids", I remember hearing a rumor that no one was a real actor in that film, so I just assumed he was being more or less himself. He plays a good moronic teenager.
Poor Brad Renfro (who plays Marty) died just a few years after this movie was made. His death was sadly overshadowed by Heath Ledger's in the press.
According to Wikipedia, all the kids' jail sentences have changed from what we see on the screen at the end of this film. Marty is no longer on Death Row, but still in jail, and some of the others have actually been released.
I saw this movie when it first came out at the movie theater in Ft. Lauderdale (I can't remember its name)  nearby the beach that has a real marquee. That part of town was a spring break landmark in the 1960s.
Posted by Machine Gun Kristin at 3:39 PM 2 comments 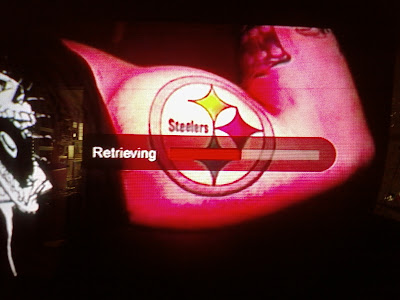 Doug Pray (who made the great documentary, "Hype") heads, "Art & Copy", a neat doc about graphic design in advertising. Above in this entry's picture, we see the major effect logos have on people. I would be really shocked if someone decided to tattoo a logo I made up on their bulging bicep.
Posted by Machine Gun Kristin at 4:20 PM 0 comments 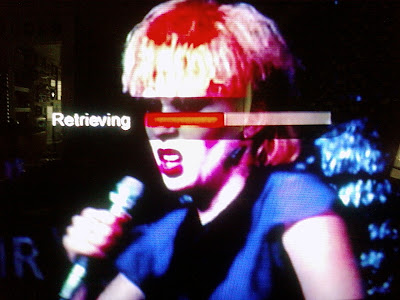 Nah, not Lady Gaga. Good gawd, I can't stand Lady Gaga. Maybe my opinion isn't entirely fair since I haven't throughly researched her music catalog and haven't gushed all that much at her extreme fashion sense. Hey, maybe she's a nice gal from New York for all I know? The little I've heard from her though is just terrible.
So, who is that in the picture? Hazel O'Connor as Kate from the 1980 film, "Breaking Glass". She wrote and performed all the songs in this film in which I'm on the fence as to whether I liked the music or not. All I know is that it stuck with me for a few days so it must've had some sort of effect on me. For some reason it reminded me of Cherry Vanilla which may be totally off the beaten path.
The story is your typical rags-to-riches-to-vanity-to-insanity, but it still works. Probably because of the strange almost operatic singing style, uber-liberal lyrics, how bleak and dark the whole film is and frankly just how scary looking Kate is with her kooky make up. The ending is uneven with the American version having a happy ending, whereas supposedly in the original European version, Kate is knocked off her high horse into the hospital where she's visited by Danny, her manager/boyfriend (Phil Daniels from "Quadrophenia"). That would have made a whole lot more sense, although her Tron-esque outfit (maybe? There's a debate as to which movie came out first) is definitely an awesome sight. These music films always hit home with me since I've been a drummer half my life. After seeing this, I want to re-watch the hard to understand, "Slade In Flame". Can you believe the DVD has no subtitles?
Finally, do you think Nick Lowe likes the sound of "Breaking Glass"??
Posted by Machine Gun Kristin at 11:10 AM 2 comments